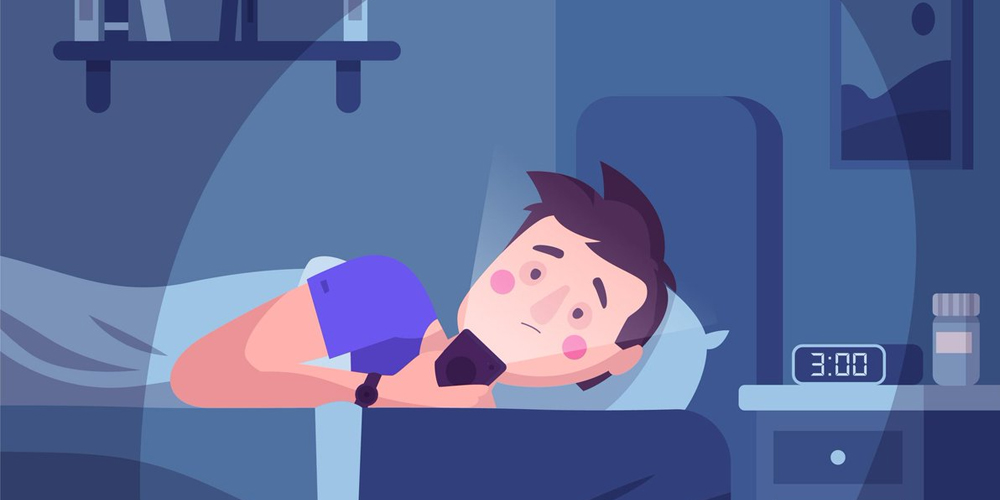 Parkinson’s and sleep disorders are deeply linked. People suffering from Parkinson’s are likely to witness sleep diseases or their severe impacts, but people involved in caretaking may also face sleep disturbances within this duration.

If you’re someone new to Parkinson’s, let us share a brief overview of the same.

Parkinson’s disease can be shortly described as a central nervous system disorder that affects movements, including tremors. Such condition arises due to nerve cell damage in the brain & the dropping of dopamine levels which ultimately leads to the symptoms of Parkinson’s.

When do you know that you’re having Parkinson’s? When tremor symptoms begin in one hand & slowly progresses to stiffness, decreased movements, and imbalance. Though medications can minimize these effects, it isn’t possible to cure Parkinson’s completely.

Sleep disorder is common in Parkinson’s

Sleep disorders (non-motor symptoms) are said to be an indivisible symptom of Parkinson’s disease (PD). It all begins with a minor or infrequent sleep disorder condition in the beginning & increases in frequency throughout the disease.

Research conducted among 1477 randomly selected Parkinson’s patients, the results were as follows: 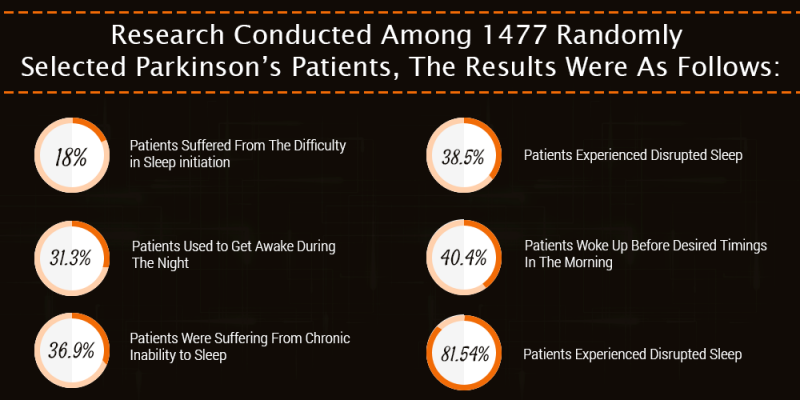 Which type of sleep disorders are faced during Parkinson’s?

What is the cause behind such sleep disorders in Parkinson’s?

If you’re trying to guess the one reason behind such sleep disorders in Parkinson’s disease, let us make it clear that the reasons could be numerous. It could be the neurodegeneration process that disrupts the networks regulating the sleep-wake cycle. Besides this, depletion of cerebral amines also happens in large numbers that are possibly responsible for initiating & maintaining sleep conditions. Other possibilities for such sleep disorders could be medications or cognitive impairments. You can now guess why PD patients cannot sleep well despite having an appropriate environment to do so.

Appropriate diagnosis & treatment of sleep disorders (as mentioned above) may lead to normalized sleep times and enhancement of daytime alertness can happen. PD patients may then expect improvements in the quality of life.

Let’s check out the common sleep disorders in detail.

When people suffering from Parkinson’s face troubles in initiating sleep, maintain sleep or tend to wake earlier than expected in the morning, it is nothing but insomnia.

Frequent awakening from sleep or sleep fragmentation also happens. Though Parkinson’s is a responsible factor for sleep disorders, they may be occurring due to depression and anxiety. Fragmented sleep may also be a product of cough, cold or heat sensations, and pain during PD. Moreover, the risk of insomnia in Parkinson’s disease increases due to drugs like dopamine agonists and their withdrawal, selegiline, entacapone, etc.

Insomnia conditions can only be treated in Parkinson’s when the type of insomnia is diagnosed precisely. You better consult your doctor & discuss whether you’re having an insomnia condition that makes it difficult to initiate sleep, fragments your sleep, or wakes you up before time.

Also known as ‘sleep attack’, excessive daytime sleepiness (EDS) is spotted when you get a sudden & irresistible overwhelming sleepiness without prior awareness of falling asleep. Frequent yawning & sleep-tearing may happen. Nearly 21% of Parkinson’s patients witness these symptoms & they increase as the disease progresses. However, the symptoms of excessive daytime sleepiness in Parkinson’s may vary with age, sleep-wake cycle patterns, daytime immobility, and the type of dopaminergic medications in use.

You’ll be surprised to know that treating excessive daytime sleepiness is a great challenge during Parkinson’s disease. Firstly, most doctors find it necessary to identify & treat common sleep disorders. Next, withdrawing or reducing the symptoms & effects of drugs causing hypersomnia like antidepressants, sedatives or antipsychotics could happen. PD patients are educated on how to maintain sleep hygiene within this duration. In a nutshell, doctors focus on improving the patient’s perception of wakefulness. After a few weeks of adjustments to this new routine & improvements in excessive sleep disorder conditions, patients may be able to diagnose the possible adverse effects of EDS.

Thus, it gets easier for doctors to identify the exact symptoms to be treated for EDS and so the treatment begins.

How to treat Sleep Disorders in Parkinson’s?

As mentioned above, sleep disorders may not be cured completely, but you can still find treatments that minimize their effects. Let’s have a look at a few tips that’ll help you to sleep better during Parkinson’s. Also, implement these sleep hygiene tips after consulting your healthcare provider.

You never know the power of light therapies, exercising, and deep brain stimulation for PD patients. It positively impacts the overall sleep quality & REM sleep disorder conditions. Besides this, you may also ask your doctor regarding effective medicines for sleep disorders in Parkinson’s like Modalert that boost daytime productivity.

If you see someone suffering from Parkinson’s complaining about sleep disorders, know that they’re frequent & common for these patients. It is quite challenging to understand sleep disorders in PD & finding their treatment is even more challenging, but it helps to improve PD management & the quality of life among these patients. Many treatment options are available nowadays, but understanding the relationship between sleep-wake cycle regulations may help in normalizing the conditions faster.